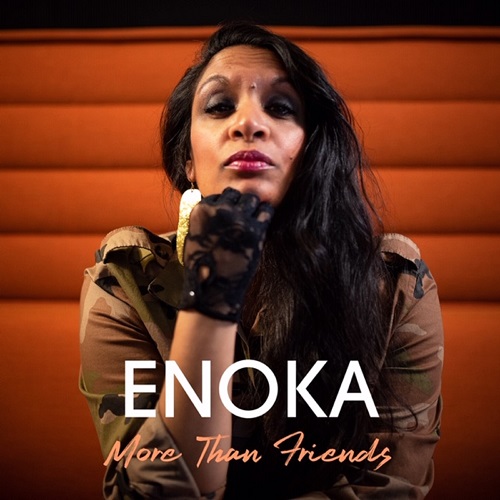 Enoka is an artist and songwriter with a distinctive way to combine the warmth of R&B with the melodies of Pop. Her most recent studio effort is a new track titled “More Than Friends”, which stands out as a great indication of the creative direction that highlights the artist’s path.

There is a sense of spontaneity that fuels the performance, and everything, from the lyrics to the production, hits the mark. The synth-driven bass line has a big sound and an 80s feel, which feels quite remarkable in terms of sonic variety and depth. The vocals are often reminiscent of the 80s as well in terms of lush echoes and reverberated sounds, but the production has a modern sheen, which makes the release all the more crisp and dynamic to cater to the audience of today. This one is highly recommended to fans of artists such as Lauryn Hill, Beyonce and Aliyah, only to name a few.

Find out more about Enoka, and listen to “More Than Friends”. This release is currently available on some of the best digital music streaming services out there.

She is a Swedish artist that has taken he career from background singer to an international platform. 2021 she was nominated for The Hollywood Music in Media Awards for best Dance and won the local part of Swedish national radio song competition with the track I’m Alive and she is played on radio stations around the world daily.

ENOKA collaborates closely with the Swedish producer Robin JOWI Andersson and new projects is coming 2022. Also new tracks from a collaboration with Johan Björk /Alexander Holmgren  is in the pipeline for releases 2022.

She has done vocals for artists like Arash, Gunter, popstar singer Margaret from Poland, Bobby Farrell from Bony M, and many other Swedish artist’s and performed background vocals live at The Eurovision broadcast in the Globe Arena in Stockholm Sweden.

Anna Marie Enoka (born 10 December 1980) was adopted from Sri Lanka and came to Sweden when she was 2 months. She grew up in Vellinge, a small suburb to Malmö, Sweden, where she still lives today. She went to music high school at the age of 17 in Malmoe. Her passion has always been music and performing live as well as in the studio. She has been singing since young age.

With the debut single ‘Like a Hurricane’ and the following tracks like ‘Queen on the Dance Floor’ ‘Salvation’, ‘Running Hills’ and I’m Alive she has taken the World with a storm and is ready to jump to the next level as an international recording artist.