Prenominated for the Latin Grammy Awards, “Sultanes del Ritmo” take the world by storm with their vibrant Caribbean music. 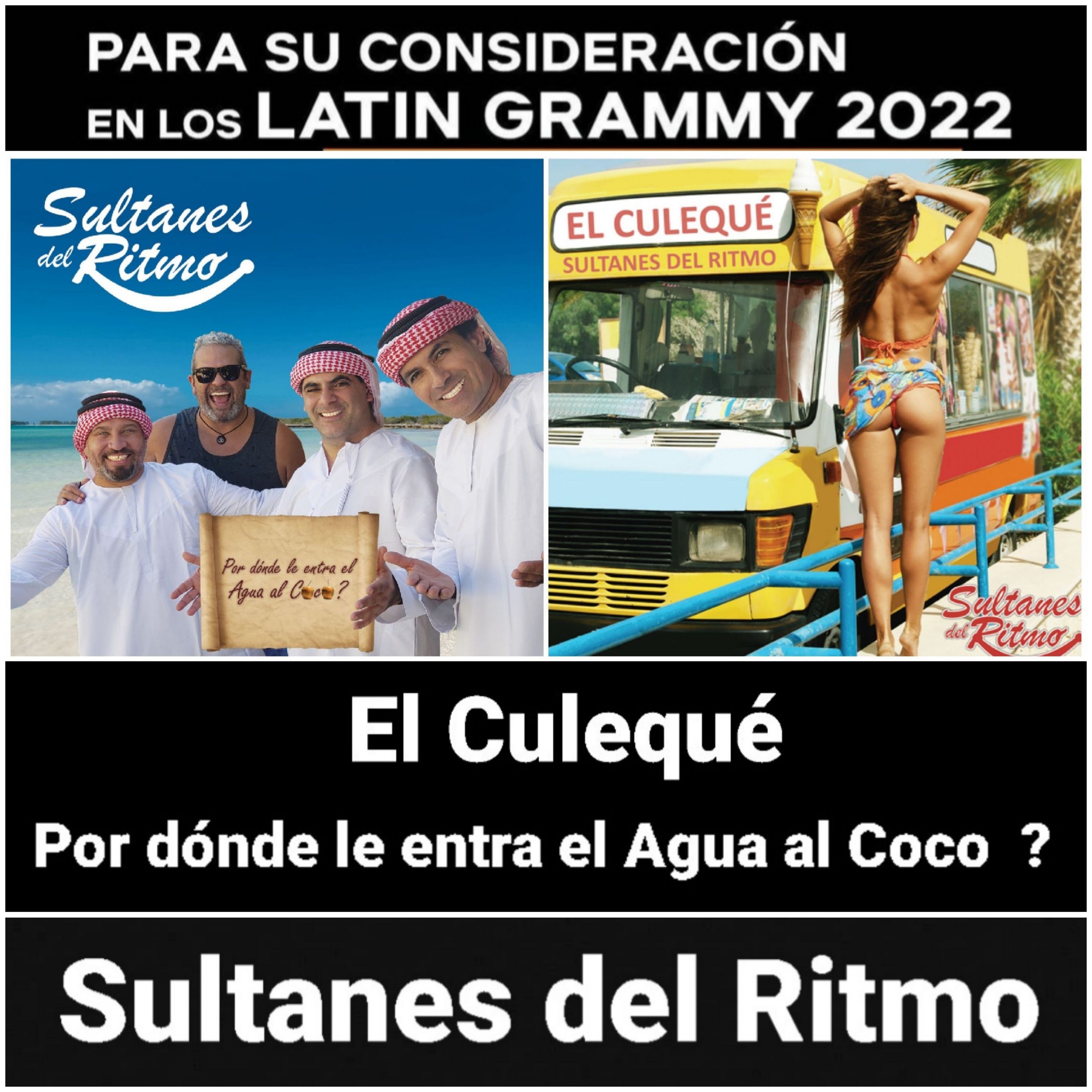 The group of Caribbean music “Sultanes del Ritmo” was born from the idea of Juan Pablo Maluk Selamé, whose artistic name would become Pablo Sabor for the effects of his participation in this musical group. Pablo returned from a trip to Cuba in 2009, where he toured the entire island practically. He arrives very inspired by the natural beauties of Cuba, its geography, its history, culture, and especially its music.

At that time, it was very fashionable cubatón on the island, a mixture of reggaeton with salsa and other typical Cuban rhythms. The movement’s leaders were Gente de Zona, which was not yet known outside Cuba. When Pablo arrived in Chile, he told Patricio Fredz, a classmate and friend from The Mackay School, about the idea of making an album with the best covers of these cubatones.

Patricio suggested to Pablo that he should compose his songs and make an album with original songs since he had had this innate talent since his school days. The idea was fundamental for the future of the group. They contact Luis Cheul Hola, another former student of Colegio Mackay, with studies in Germany, as a Music Producer and Arranger. All this is recorded in Luis’ studio in Concón, with only a simple Apple computer.

In 2011 the debut album “Cayo Coco” was born under the group “Pablo Sabor y Los Sultanes del Ritmo.” Pablo’s experiences inspire the album in his travels to Cuba and other provinces and world cities such as Andalusia, Rio de Janeiro, and Buenos Aires. The group’s vocalist is Pablo, and his friend Patricio Fredz is the phrasing and backing vocals.

After a while, they realize that they have to make everything more professional, and some new decisions are taken. The next album should have only one melodic line since the first one grouped too many styles (Caribbean rhythms, flamenco, samba, rock n pop, etc.).

They opt only for the Caribbean and tropical rhythms but with modern arrangements (salsa, merengue, montuno, cubatón, etc.). The group’s name was shortened to “Sultanes del Rimo,” They had to look for a new professional vocalist to give the group a more Caribbean style.

In 2013, Pablo and Patricio attended a Havana Club event in Santiago, where they met Alex Salcedo Ballester. Alex was Cuban and had been living in Chile for 10 years. Alex’s magnificent voice and characteristic Cuban phrases and intonation made him the perfect person the group needed as lead singer. It was decided that Alex would provide his voice in the main songs of the first album (Cayo Coco, Papá Montero, and Viña Bonita y Sabrosa). Pablo composed some more songs, and thus the first album of the same name was released in 2016, already considered the official album of “Sultanes del Ritmo.”

Video clips of songs such as “Embustera” were later made with the Cuban Betsy Camino, Queen of the Viña del Mar Festival at that time, and the Dominican model Anita Febrile, well known for her resemblance to the American singer Rihanna. Previously the group had videos with other international models, among them the Argentine Connie Mengotti, Miss Playboy Argentina, who participated in the video clips “Viña Bonita y Sabrosa” and “Súper Rico,” along with other Brazilian, Cuban and Chilean models.

The group has always been characterized in its videos for incorporating beautiful and sensual models and using humor, joy, and the tastiness of the Caribbean in its productions. In 2018, a new challenge began at a very professional level, and work started in the prestigious Studio Azul in Valparaiso, under the supervision of sound engineer Rodolfo Frigolett, on a new album that would be definitively named “El Culequé,” which was also the name of the most successful single of the album.

The album finished recording in 2020, and the group made 2 necessary trips to Cuba, during which they recorded the island 5 video clips of very high quality, most of them under the outstanding direction of the Cuban Zenia Vegas.  “Que Rica es Cuba,” “La Condesa Blanca,” “El Caimán,” and “Babalú” would stand out very much. This last video was filmed in the eastern province of the island Granma, specifically in the city of Manzanillo. The video obtains 2 important awards: Best Direction at the “Festival de Manzanillo” and Best Music Video at the “Festival de la Provincia de Granma.”

On the other hand, together with the other 3 videos-clips mentioned above, they reached the Top Ten in the Cuban Video-Clip Portal as part of the most watched videos of each week worldwide, made by Cuban singers or directors. Later they recorded in Chile the video “El Culequé” in Studio Azul, already relocated in Viña del Mar, under the direction of Alonso “Coco” Valenzuela” and this video became a success achieving more than 100.000 reproductions on YouTube in only 5 days and becoming Number 1 in the Cuban Video Clip Portal in the week it debuted.

Once this successful album was finished, which also included a tribute to the outstanding musical master Dámaso Pérez Prado, whom Pablo greatly admired, the group decided to start a new stage and climb even higher. In 2020, due to differences with their music producer, they began to work with Lino Borbolla Uganda, a close friend of vocalist Alex Salcedo since childhood, and with a tremendous musical experience and trajectory. Lino was the Music Producer of the mythical “Cubanacán” and the Head of the Saxophone Performance Career at the Escuela Moderna de Música Santiago.

Together with Lino, professional and personal chemistry immediately took place. Under his Musical Production and Musical Arrangement, they made two remakes of old classics of the group: “Cayo Coco” and “Papá Montero,” in their new versions of the year 2020. These two songs would become part of their new and last album to date, quickly becoming the most successful of all: “Por dónde le entre el Agua al Coco? ”

The first two singles are released on all digital platforms worldwide, and “Por dónde le entre el Agua al Coco ?” and “El Billete de 100” become resounding hits, both videos reaching Number 1 on “El Portal del Video-Clip Cubano” being the most viewed videos of this important medium worldwide in their respective weeks of publication.

Then came the songs “Échale Limón y 3 de Azúcar”, “Glamur,” and “Mariwana Baby,” which would complete an album of 10 first-class songs. After much searching, the band finally contacted Cuban sound engineer Geronimo Labrada to mix and master the album.

Geronimo does an outstanding job and takes the album to a higher and 100% professional level. Pablo also decides to have Geronimo remix and remaster his previous album, “El Culequé,” at an excellent level and with a great sound. Geronimo completes the piece of gear that was missing for the group to be sounding at its best and compete worldwide.

As an additional member of the Grammy Academy, Geronimo decides to nominate both albums for “Best Album” in the “Contemporary Tropical Music” category.

When in June 2022, the pre-nominees for the Latin Grammy Awards were announced, the group’s surprise was even more remarkable: their two albums were pre-nominated among the 59 best albums in the world in their category, an achievement that had never before been reached by a Chilean group and that this year was only achieved by the outstanding Colombian singer and composer Carlos Vives. In addition, the Latin Grammy Academy decided to leave the two albums of “Sultanes del Ritmo” pre-nominated in the “Best Album of the Year” category, including all competing musical sorts.

This unprecedented achievement was reached without any promotion or resources for diffusion. Without the group’s support of any music label, the merit of the achievement is gigantic since, in the final phase of the 5 final nominations, the promotion of a vital label is fundamental.

“Sultanes del Ritmo” continues to reach important achievements and break new records. No one doubts that in 2023, which is already approaching, they will surprise again with new and unprecedented achievements that will be recorded forever in the history of national Latin music and worldwide.